This is the second article about stability of heavy lifts and transports. This one covers loads that are suspended in a crane but have their horizontal movement partially restrained by some device. The first article can be found here: https://www.open-ocean.org/vessel-sta…

It also showcases the use of contact shapes, automatic ballasting and visualization of hydrostatic stability calculations.

If you want to challenge yourself then think about what would happen if you have not one but two cranes: 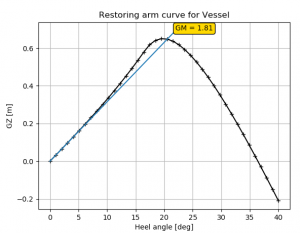 "What is the stability of a vessel during lifting or other operations?" A very valid question. And one to which…