The xmas2020 Christmas card was prepared in DAVE and finalized with Blender.

The tug is the the Husky with a big red nose added. The barge is a regular barge automatically ballasted to the standard draft. Both have first order wave interaction created with Capytaine in combination with shape based hydrostatics. Easy.

The centerpiece of the show is the flexible tree. To make the tree flexible its stem and branches are modeled using beam nodes. Visual are added to the ends of the branches. So it is actually a fully flexible structure and its motion response is calculated by the frequency domain solver.

A bit of python code was used to programmatically generate the tree:

The positions and orientations of the axis systems in the stem and at the ends of the leaves is not given, these are solved by the static equilibrium solver:

Stacked axis systems (subsequent rotations) are used to orient the branches relative to the stem.

Some custom blender visuals were created for the leaves, lights and the decorated barge. Barge, tree and tug motions were calculated with DAVE frequency domain for a single regular wave (enabling me to loop the video and save rendering time). The standard background was replaced with a “magic” texture and the sea was given a greenish glow for illumination.

The final result was rendered with Blender and stitched together using Kdenlive.

I thought this was going to be a long story, but it was actually quite easy 🙂

These are some steps to get orcaflex and conda to work together. By default they don't, but with some hacking…

Release 1.4 Features: Tanks with a free fluid surface are now available. They work in the same way as buoyancy… 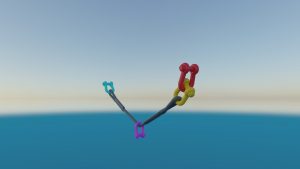 DAVE 1.3 has been released. This is a major update with the focus on rigging design and reporting. This post… 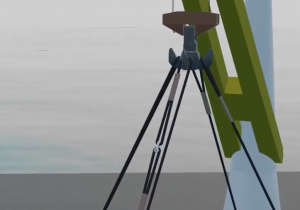 DAVE supports non-zero diameter cables running over sheaves or round-surfaces. This allows for super accurate modelling of rigging geometry as…