Many offshore operations can be modeled using first order time domain analysis. Setting up the vessels for such a model using orcaflex is easy but not trivial, but in the end it is just book-keeping.

This guide presents a step-by-step guide for setting up a vessel with first order diffraction data from orcawave. It also introduces an alternative way of modeling the hydrostatics by removing the gravity effects from the stiffness matrix. This may sound difficult but it actually makes many things a whole lot easier. Especially if the vessel is composed of multiple elements such as cranes, cargo is placed on it or lifted from it or multiple vessels elements are interconnected. In those situations the standard formulation of hydrostatic stiffness becomes extremely complicated. In those cases you really need this. But also for a simple vessel I recommend to use this method.

This article is a practical guide. In the end it is all just book-keeping. All actions are marked as:

But we will start with some theory to outline where we are going.

Hydrostatics is the most tricky part as it comprises two components. The static component due to the weight of the vessel as well as the static component due to the displaced fluid. Typically these two are combined, resulting in the familiar GM value. Here G is the gravity acting on the vessel and M is the metacenter, a point derived from linearizing the horizontal displacement of the center of buoyancy due to vessel roll or pitch.

This is simply the water that the vessel displaces when there are no waves. This depends only on the shape of the hull of the vessel. In DAVE this is beautifully implemented using the “buoyancy-shape” node.

In orcaflex this is going to provide the data for vessel-type→stiffness, added mass, damping.

This is the gravity acting on the vessel and everything on and/or attached to it. This includes ballast tanks, deck cargo, items in a crane, pipes running overboard, mooring.

The good news: all these items will be modeled outside of the vessel and vessel type. They will not interfere with any of the data entered in the vessel-type.

This is the part that orcawave calculates (or any other diffraction package such as wamit, capytaine, etc).

This is the dynamic version of 1b. Again, we will not include this in the vessel-type. Instead it will be included by adding 6D buoys or other items with inertia to the vessel

This is exactly how DAVE exports vessels to Orcaflex. Instead of following the rest of this guide you can also do:

During the operation the draft, heel and trim of the vessel may change. However we can only provide hydrodynamic data for a single situation as every vessel can have only a single active set of hydrodynamic properties.

Next create a panel model to be used for the diffraction analysis. You will need an external program for this. Export the model such that the origin is horizontally more-or-less in the center. A typical choice is midship or LCF. In this example I’ve used a point 70m in front of the stern just for illustrational purposes.

In orcawave, from left to right:

Use the draft, heel and trim as selected during the preparations. Advise to leave X,Y and heading at 0.0

The only thing of importance here is to

Inertia is not needed. Enter something that is clearly not correct to avoid confusion. Inertia is only needed to calculate displacement RAOs (which are evil) and second-order effects (which we don’t include in this guide)

Marvel at the beauty of your mesh for a moment. Then verify that everything looks nice. The vessel body frame (the axis system shown) should be somewhere in the middle of the vessel.

This example mesh gave a lot of warnings. I ignored them all. My advise is to first look at the results of the calculation before starting to fix things. Maybe nothing is broken and nothing needs fixing.

Run the calculation, this should normally not take too long. If it is taking hours then you are doing something wrong or you have a non-typical shape. A model with less than 2000 panels should be done in a matter of minutes.

Get the calculated CoG

The last bit of information that we need to obtain in the CoG location.

Now this CoG location is not something we entered. Is was calculated by OrcaWave to be at the same horizontal position as the center of buoyancy that it calculated from the mesh.

We need it when importing hydrodynamic data into orcaflex later on.

Load the results into orcaflex

Next thing is to import the data from orcawave.

This is the part that everybody does wrong the first two or three times, so read carefully and I’ll do my best to explain it clearly.

All the data from orcawave, or any other data-set that can be imported, has a position. The wave-forces for example are the forces and moments acting on certain point on the vessel. This point is called the “reference origin”. Every kind of load on the vessel has its own reference origin.

The trick it now to set the vessel-type CoG such that the stern/centerline/keel points from both models will match. Again, this has nothing to do with the actual center of gravity.

If you get an “The imported damping matrices were xx% asymmetric.” error, then head over to the “Conventions” tab and set the symmetry to its correct value:

Enable local axis (Ctrl + Y) and see that the models mesh has been imported as visual and is at the position where you wanted it to be.

And then to the hydrostatics

The reference origin datum position gives the position of the reference origin when the hydrostatic springs are in rest, ie: unstretched. The linear and angular stiffness of these springs is defined in the “hydrostatic stiffness” matrix. Normally in orcaflex this matrix contains contributions from both the interaction with the fluid (metacenter, waterplane area, center of flotation, metacenters) as well as contributions from the displacement of the center of gravity. From the manual: “The hydrostatic stiffness matrix describes the way in which the net weight + buoyancy load varies with changes in position from the datum position”.

Removing the weight component from this matrix makes everything a lot easier and cleaner. And there is more good news: we have already removed it. In orcawave we defined the vertical position of the cog to be zero. This put the cog of the orcawave model at the waterline. At is happens, this is also where the reference origin for the hydrostatics is. The result is that the cog never moves relative to the reference position which makes all its contibutions zero.

TLDR; By putting the cog at the waterline in orcawave, we effectively kept the weight effects out of the hydrostatic stiffness matrix.

If you are ok with using the hydrostatic values as derived from the panel mesh, and you filled in a cog z of 0, then you can just keep the values as imported from orcawave and skip the remainder of this section.

If you have more accurate values for the hydrostatics (ref: preparations) then it is now time to use them.

Then the hydrostatic stiffness. Without the weight contribution this is quite straight forward.

These define the hydrostatic springs attached to the reference origin. They model the effect of the displacement of the CoB and the change in buoyancy when this point moves.

As said earlier, it is beneficial to model the fluid part of the vessel separately from the structural part. In the previous section the fluid part was put in the vessel-type. Time to define the weight and inertia part.

Use as many elements as you want. Also you are not restricted to just buoys. Cargo on a contact-surface: fine. Cargo suspended from a line, winch or spring: fine. Moving parts (cranes, trailered cargo items) modelled by constraints that are connected to the vessel: go for it. Really anything you can think of.

Final step is to tell orcaflex how to calculate the vessel motions.

We want the motion of the vessel to be calculated based on the forces acting on it.

The basic model is now done. Time for a self-check.

One of the checks that should always be performed decay tests.

Next test is to add some waves and visually check if the vessel behaves well.

Wind and current forces can be added to the vessel type.

Additional damping due to viscous effects (bilge keels) can be added to the vessel type in the “other damping” section.

The vessel is currently not moored, so it will drift off during time-domain simulations. Attach it to a constraint with soft springs to keep it in place. Make sure that these springs are stiff enough to keep the vessel from drifting off but soft enough not to change the first order behavior. 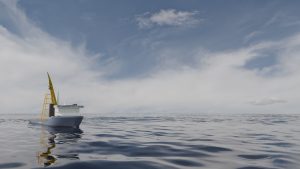 This is the second article about stability of heavy lifts and transports. This one covers loads that are suspended in…